How to improve your cat pictures

Purr… good nap this is.  But my paw is a bit stinky.

Whatever is making my paw stinky… 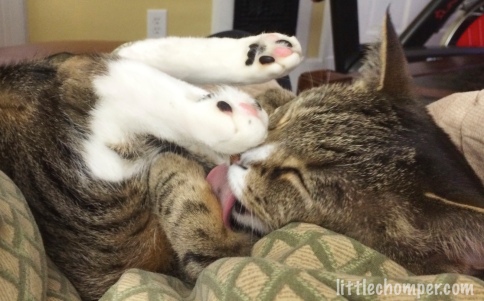 Must be licked off.

But I’m sure it would have tasted much worse to humans.

Those humans never lick my paws for me.  This is probably why.

But, right, I remember I’m supposed to work today.  By work, I mean remaining awake.

Can we discuss cat pictures today?  People like my pictures.

It’s not just me being cute.  I know I’m a good model, but you should see me without my eye liner.  Absolutely hideous.

I’ll need some transportation to the photo shoot today.  My car’s in the shop.  Yes, that means you pick my furry body up and carry me over.

So this is my first tip.

Don’t let your cat stress more than it needs to.  You want your cat to be lazy and happy, or else she’s not going to care about your silly pictures. 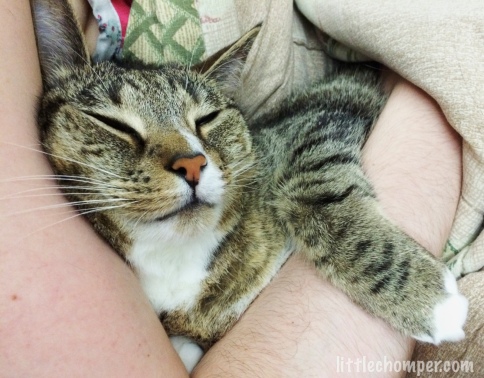 Am I there yet?  We can start? 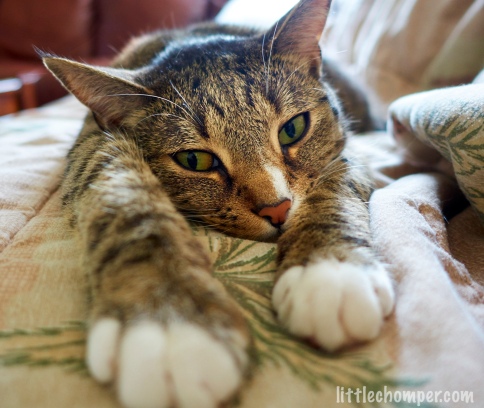 Next tip!  One of the most common screw-ups you can make with a cat is improper lighting.  But you can’t always drag a lamp over without startling your furry subject, so take the picture, and then correct it later.  If you’re taking pictures with a camera capable of “RAW” mode, you’ll be much better off.  Trust the cat.  You won’t be able to do that with an iPhone and most Android phones though, but you can use a lot of the advice that follows anyway.  You might want to consider a better camera app though.

But anyway, initially, I didn’t look so good in that last photo.  Scott had some work to do.

You see the original photo to the right?  There are a few things wrong with it.

It’s certainly darker.  The whole photo is made a tad brighter with more saturation (i.e. more colorful).  The two main changes are the “local adjustment” and the cropping.

A local adjustment is a simple thing.  You see, people mainly care about the face when it comes to cats.  That’s why cat lovers like cats more than dogs.  We’re more expressive.  So show that face off!  Scott uses a nice editing tool called “Capture One”(best with RAW images) which makes it quick to brush over my cute mug, as so: 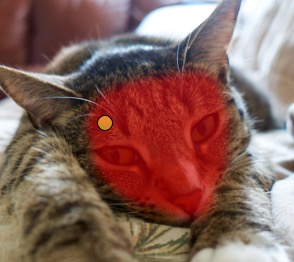 And then he brightens me right up!  Don’t worry, that red area is just temporarily showing what area is selected.  I don’t always look like Darth Maul.

The other thing is the cropping.  Sometimes the interesting part of a cat is the pose.  That’s when you want to capture most if not all of the cat, and perhaps the surroundings.  But often you want the viewer to have a connection with your cat.  It’s okay to clip off an ear, or even some of a paw.  Paws are cute, so not too much.  But still, look again at the before and after.  Don’t you feel a stronger connection with the Luna in the picture to the left, with me being more centered and up close and personal?  Purr!  You want to hug me!  You want to feed me!

Sorry, you don’t understand what it takes for a cat to stay awake.

My favorite lesson is next!  Sunbeams!

I know I’m farther away, but the floor is interesting, no?  It adds something to my photo, especially with the sunbeam reflecting off it, so don’t you be cropping me aggressively this time!

Unlike that last photo, you can see how nice it looks when a cat is facing a light source!  The sun is the ultimate light source.

Do you see how my eyes light up?  Cat eyes are creepy things, and creepy is interesting.  We’re likely to close our eyes quickly in the sun, so have your camera ready, because our eyes look really cool when our pupils shrink!  My face is nicely lit up too.  And the sunbeam gives the picture nice, dramatic contrast.  Almost film noir.  And sunbeams are warm, so your cat is happy to stay still as you fiddle with your camera settings.

When you adjust your camera to properly expose everything in a sunbeam, the surroundings look shadowy and dark.  This is especially good if you live in a house as messy as mine.

Sometimes the shadows add some “uneasiness” to the photo.

What is it that I’m looking at?  What lurks within the shadows?  Why do I maintain this suspicious gaze?

It’s not really suspicious.  I’m just getting tired of keeping my eyes open in a sunbeam.  But as far as you’re concerned, my tiny cat brain is wary of something in the shadows.

But here’s another problem.  What if you have a wonderful sunlit whisker shot but you have a little too much contrast going on with the face?

I want you paying attention to my fine whiskers, and not my evil eye!

In many photo-editing applications, you can adjust the highlights and shadows separately.  Even Mac OSX’s “Preview” app lets you do this.  Here it is in Capture One, while Scott is tweaking my face.

Seems he really wants to recover detail in my over-exposed eye, and also brighten up the shadowy eye a bit.

It’s subtle, but it looks like my left eye isn’t being blinded by the sun as much as it is.  And my left eye is brightened a bit.  That sharp boundary between light and dark across my nose has been softened quite a bit.  I don’t need to look like no yin yang!  I’m a cat!

Cat eyes are very bright and reflective, however, so often…

…just facing the window at all is enough.  This is a good opportunity to warn you what I’ll do to you if I hear you using your flash on a cat.  I will end you.  Do not do it.  No one wants to see the demon within your little monster, trust me.

But now I’m gonna teach you the secret sauce.

The best part to any cat picture.

Give me a moment to prepare.

Meow.  I can do this.  They’re waiting for me to do this, and I won’t disappoint them.

This is me mid roll!  You need to have your camera set up appropriately for an action shot, but the sunbeam makes it much easier!

For handheld still photos of cats, you want your shutter speed to be at least 1/60th of a second, but when a cat is moving, you’re going to want that shutter to be 1/250th a second or shorter.  It’s possible to bring it down to 1/200th a second, if you want a little motion blur, but usually you want nice crisp whiskers.  If a cat doesn’t show off her whiskers, I simply cannot fathom what she’s trying to do.

In sunbeams, however, shutter speed is usually a non-issue, because you have to up it considerably anyway just to avoid overexposing your cat.  But there’s another trick to it.  Can you really snap the picture at the right moment?

No, humans cannot approach the coordination and fast reflexes of a cat.  You need some help, and you have two options.

Your camera might have a “continuous shot” mode.  It lets you take pictures in rapid succession, and the camera doesn’t do the processing on them until later.  *clickclickclick*  Then review your pictures, and choose the ones you like.  You get a lot of fun pictures that way.  It’s worth it to figure out how your camera works.

Or… if you want to cheat…

No one on the internet will know if you take video, and then just pausing it and taking a screenshot.  On your Mac, that’d be Command-Shift-4 and just select the paused image.  Between you and me, that’s how Scott gets pictures of me making the silliest faces…

Like this one, from my “Winter Trauma” post.  How can you not love that face?  You can only fix up screenshots from video so much, but in this case, it was certainly good enough.  I suppose in retrospect I could have brightened up my face a little more.

Also, do you know the cardinal rule about cat photography?

You don’t?  I suppose you’re going to learn it right here then.  Set the camera on the carpet right in front of me and you’ll see.

Do you see why this shot works so well?  It’s the low angle.  The camera should be at the cat’s eye level or lower.  If you just point down at your cat and snap a photo, great, you have a pet.  Who cares?  But if you can look into a cat’s eyes, and stand there nose-to-nose, the cat suddenly has a personality.  It’s a he, or a she.  An individual.  The cat is more interesting, and your photo is more interesting!  So don’t be lazy.  You get down here if you want to take a decent picture of me.  As a bonus, carpet looks great on camera, don’t ya think?

Last tips.  Indoors, especially at night, you’re probably going to want a high ISO.  On the average compact camera, that probably shouldn’t be higher than ISO 800, but for a big camera with a larger sensor, crank that baby up to a couple thousand!

Also, get too close to your cat with large aperture (f/2.8 or greater) and you start to get big nose pictures.

Maybe you like the big nose.  You probably wouldn’t want someone making this mistake on your driver’s license though, believe you me.

Meow!  This was a fairly long post, but I think you learned something here, didn’t you?

Lookin’ forward to seeing your own cat pics later.  Now, if you don’t mind, it’s about time for a nap.  It’s been at least fifteen minutes.

Feel free to find yourself a nice spot on the carpet too.  Purr!  We’ll have ourselves a nice little slumber party.

And now for Luna’s after-post commentary! 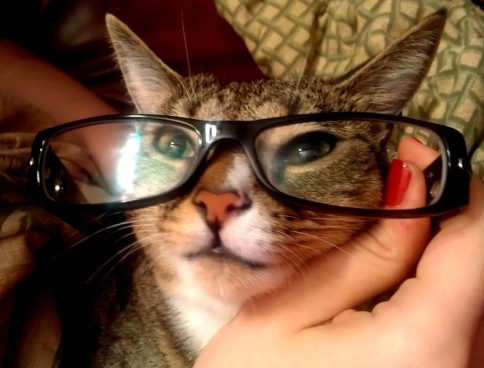 Meow all!  How about that!  My second educational post!  You might’ve enjoyed my last one, Cats 101, but I think this will be useful for a lot of my fellow cats around the internet who wonder what my secrets are.  No cat can really look this good without a little trickery.

First, I’d like to thank the five people who bought my new book so far!  I’m still hoping to get advertised by Oprah, so I can reach my goal of 50, but until then, I think five is pretty good for a cat!  With or without Oprah, I had a blast publishing my first book!  And it’s a beautiful piece of art too. 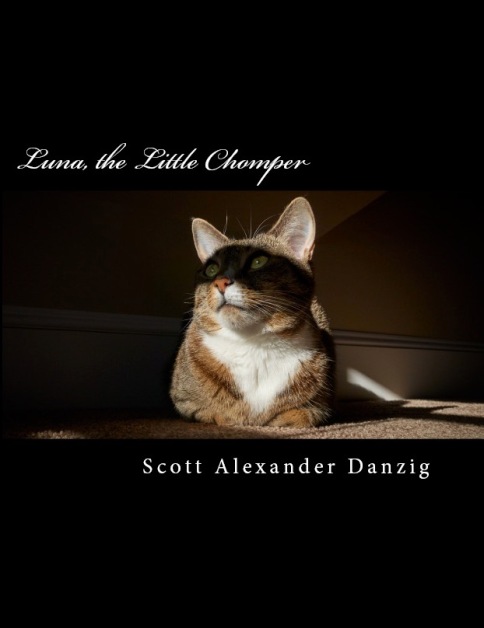 I currently have one of your photos set as the wallpaper on my macbook air.  It’s this one (https://littlechomper.files.wordpress.com/2015/03/luna-on-blanket-with-paw-out-in-front-and-ears-back-looking-left.jpg) where you look like a proud and splendid lioness.  It fits well, covering the screen with wonderful Lunaness, but I wish there were more photos of you that would work well for widescreen monitors, including cute and silly ones.  Maybe you could get Scott to take some specifically with that in mind.

Congratulations on your new book.

Thank you so much Annie for the compliments on my picture!  It certainly uses a lot of the principles I discussed in this post!  Note how the low angle makes me look so regal!  Purr!!  And I know you’re one of those who purchased my book.  I know you’ll enjoy it!  I will look into making such Luna-backgrounds available, as per your suggestion, and will announce them in a future post!

But for now, back to my slumber party!  Have a nice night, everyone!