Luna was napping her life away, as a cat should do.

The sunbeam was all she needed.

Well, that, and the occasional trip to the litter box.

However, today was different.  Today, something didn’t feel right.

She was having a hard time peeing in the litter box.  She’d sit in the litter box for up to 20 minutes at a time, just trying to get the littlest amount out, and often it’d be colored red.  She started to try peeing in other places.  I was following after her with all-purpose cleaner and a roll of paper towels.

This was one of her choices that was easier to clean up, but I had to hide all rugs, which she opted for given a chance.

Eventually, Luna and I had to talk. 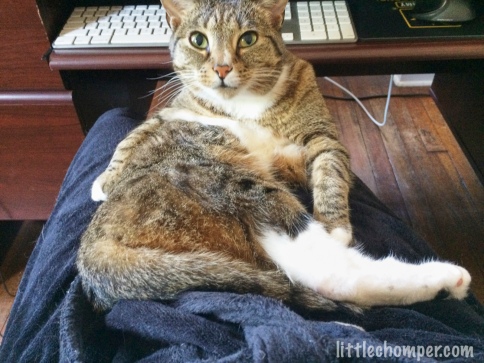 Luna explained to me that something was very wrong.

I quickly delivered a sample of pee to her vet, at Dickin Memorial Animal Hospital (in Johnson City, NY), and we had to wait to see what the problem was.

Meanwhile, Luna’s behavior started to change.  I would try to touch her, and she would lash out at me

I even tried to get her her own chair…

I found her bathing in another sunbeam near the stairs…

… but she was looking at me with suspicion!

I tried to pet her!

I could tell she was suffering, by the way she slept.

She just wasn’t her usual self.  So much effort trying to pee.

She was outright exhausted.

The test results came in.  Luna had a nasty bacterial urinary tract infection.  I rushed to the vet to get antibiotic pills for Luna.

The vet tech at Dickin Memorial even taught me how to “pill” a cat, demonstrating with one of the cats that reside at the animal hospital.

Luna was much less accepting, however.  I had to be creative in how I fed the pills to Luna.  In the past, Luna had taken the same pills when she had problems peeing, but that turned out to be related to “struvite crystals”, not an infection, and was easily cleared up by changing the brand of her food.  With the infection, Luna’s normally ravenous appetite waned.

This is the saddest picture I’ve ever taken of the Little Chomper.

She was not only not eating, but she was also vomiting, a lot.  She normally would sleepwalk over to eat any food within paw’s reach, but now, I was having nightmares about how bad this could get for Luna.

Since Luna wasn’t eating much at all, it was difficult to get her to eat pills with her food.

But if you know anything about me from my blog, you’d know I can be creative.  She still was eating her “Greenies” cat treats.  I would at least get her to start eating her food by inserting one Greenie in each small portion of food.

A little hors d’oeuvre.  It worked.  When Luna loses focus on food, I can point at the food on her dish and she’ll resume eating, like a parent telling a child to eat their dinner.  It’s cute.

But to sneak a pill in that little portion?  I was using these “pill pockets”, which are a salmon-flavored chewy substance that wraps around the pill… but she certainly wasn’t in the mood for that now.  She would lick and moisten the encased pill, but leave it on the plate.

I tried crushing a crunchy treat and rolling the chewy pill pocket in it, making a “greenie truffle”.  Didn’t work.

I tried cutting the crunchy Greenie in half and carving out a hole inside, then “gluing” the halves back together, with the pill inside, using some of the chewy pill pocket, making a “Franken-greenie”.  Didn’t work but she probably would have crunched through the pill anyway, exposing its bitterness and destroying it at the same time.

Luna did not want anymore food!

But I persisted, slipping the pill at different places in Luna’s food, frequently.  I managed to get her to eat two, but after a conversation with the vet, again, I learned of a seemingly perfect solution.

There’s an injection Luna could get instead.  Just one shot, instead of the 28 pills over two weeks.  I remarked that it sounded awfully convenient, and the vet tech replied, “That’s why it’s named ‘Convenia’!”

I changed into skeptic-mode.  Why wasn’t this recommended first?  What’s the catch?  Is it less safe?  I was told the one main problem… If Luna has a reaction to it, it’s too late to get it out of her.

I googled, “convenia side effects” and saw endless reviews like this:

He said that he could give him a shot that would last 2 weeks. Wow that’s convenient !!! Well 24 h later he was dead.

I saw similar reviews for another medication I used, “Frontline Plus”.  Would a vet recommended by the local humane society be prescribing medication that’s so deadly?  I had a feeling that competing companies were regularly putting up false reviews to scare people away from the leading products.  After consulting with another veterinarian online, who used the same injection hundreds of times without a problem, I was feeling better about the injection and scheduled an appointment.

While waiting, I flipped on the movie “Hotel Transylvania”.  Luna seems to be back into affectionate mode.  She especially loves when I’m lying on the sofa.  She’ll lie down directly on my trachea.

Tracheas are comfy!  But cats so not settle for one position before going comatose.

Lots of purring, and then… THIS!

And she stayed like that for the rest of the movie.  I have a stoic expression on because it requires a lot of concentration to frame this picture right without dropping my phone on Luna.

But eventually, the movie ended, and it was time to go to the vet. 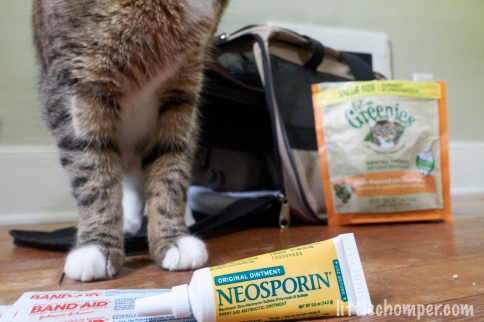 Luna… I said it was time to go to the vet.  Get in the cat carrier.

So soon Luna was on her way.

And after we arrived, she was hoisted on the table in her favorite vet’s office. 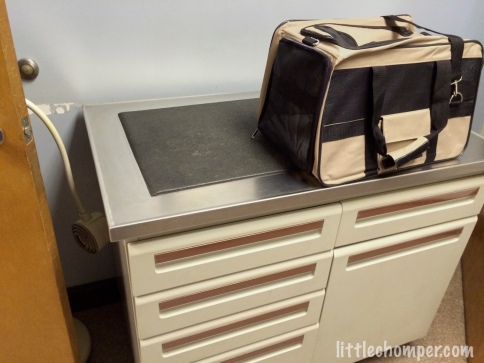 Luna was sitting very calmly and quietly, but I knew better.  I knew she was just saving her energy for evilness.

I knew, by this point, that my precious little Luna wanted to kill everyone, and everything.  She wanted you dead as well.  Sorry.  Luna was just about the most evil creature that ever lived, and ever will live.  I was going to offer to pull her out with my unprotected arms (in short sleeves) and put her on the table, but then I thought better of it.  I knew they had a nice pair of thick work gloves, so I asked for them.

Luna, the Little Chomper, chomped the vet technician during her last visit, while she was wearing the work gloves.  While the technician said it was fine, perhaps it wasn’t, or the doctor wanted to avoid the chance of it being worse next time.  She suggested we leave Luna in the carrier and put a towel over her while holding her in place.  While the injection is normally inserted in the scruff of the neck, just like last time, Luna would get a shot in her butt.  I’m convinced that Luna likes it that way.

So it happened, just like that, and Luna gave me the stare of death, never looking away, the whole drive back.  Then, when we got home, she begrudgingly accepted her two “apology treats” and I opened the window for her to look at birds.

Sure enough, Luna was going to stay grumpy for a while.

Man, I’m getting tired of this domestic shorthair violence.

After a grumpy while, Luna meowed at me and got her dinner.  Her appetite appeared fine, as she ate her usual portion fairly quickly.  I fed it to her half at a time, just to help ensure she kept it down.  When she went to pee, while it was still a small amount, it was fairly quick, which probably means she’s feeling less discomfort.  Maybe those first three pills were having an effect already.

She disappeared into a box, but then stretched, jumped onto my computer desk, nuzzled me repeatedly until I stopped writing this story, and collapsed onto her computer desk cat bed.  As you can see, she’s no longer murderous.

It looks like Luna is doing fine now, and I’m convinced she’ll only get better from here.  It looks like my little Luna never had any other plans in mind.

A great sign… she just finished playing a round of The Game of Treats!  And as you can see from this post, she has also resumed activities related to her modeling career.  She may be nearly back to her old self.

Update from the Little Chomper!

Meow folks!  Sorry to worry you guys about this.  It’s not been the best weekend for me, but I’m ever thankful to Dickin Memorial Animal Hospital, for taking great care of me.  And not to worry.  I enjoyed getting another shot in my butt!  Purr!

Also, my book is FINISHED!  It should be on Amazon some time this week!  There will be another post about it soon, but here’s the cover!

I got a “Dear Luna” email from one of my fans!  It looks like I should answer these questions at once.

When I’m contemplative, I’m not thinking about food, as rare as it is.  I’m not thinking about sleep either.  My eyes would certainly not look “contemplative” in that case.  No, I’m usually thinking about the nuances of French culture.  It’s something I’ve always been interested in, ever since I was a kitten.  Or I might be looking for birds and insects.  Or reciting holy passages from the teachings of the Sun God, but that’s only when I’m on my way to the vet.

I hope that answered your question.  I’d have written more, but I’m sleepy.  Good night.